Crazy race full of tension, in the end Hamilton wins

Max Verstappen will go into the final race of a gripping 2021 Formula One season with the world championship lead after finishing second in a wild inaugural Saudi Arabian Grand Prix on Sunday, the Red Bull Racing Honda star taking his 17th podium in 21 races this season.
The race at the brand-new Jeddah Corniche Circuit promised plenty of action and delivered on that in spades, with incident and accident seeing the 50 laps take place over two and a quarter hours. This was due to two red flags, multiple safety cars and constant virtual safety car periods to remove debris from the high-speed layout.
When the dust settled, a win for Mercedes’s Lewis Hamilton, along with the fastest lap of the race, saw the Briton draw level in the Drivers’ Championship standings with Verstappen on 369.5 points. The Dutchman takes the lead into the season finale in Abu Dhabi next weekend by virtue of having more race wins this season (nine to eight).

The longest season in F1 history effectively comes down to a head-to-head one-race shootout for the title at Yas Marina next weekend, after Verstappen and Hamilton finished first and second in a race for the 13th time in 21 Grands Prix.
Verstappen led for 31 of the 50 laps, but they key moment of a race, which will be talked about for years to come, came with 13 laps remaining, when Verstappen was judged by the stewards to have left the track at the first corner and gained an advantage when under attack from Hamilton, which prompted a five-second penalty.

“This team has put together a phenomenal campaign this year. We’ve won 10 races, we’ve taken Mercedes all the way to the final race. The Constructors’ (championship), we’re on the back foot and it will need a miracle to win that, but we have one more shot to have a go at winning this title with Max and we’ll do everything we can.”

Here’s how a madcap race played out on the streets of Jeddah.

On a chaotic night in Jeddah, the first race in the Gulf kingdom took almost as many twists and turns as an already astonishing and enthralling rollercoaster season — and also left a bitter aftertaste.

There were crashes and collisions, safety cars, red flags, and claims of dirty driving after seven-times world champion Hamilton hit the back of Verstappen’s suddenly slowing car on the super-fast Corniche street circuit.

Extraordinary, at times angry, radio exchanges between the race director Michael Masi and the top two teamsfilled the airwaves. 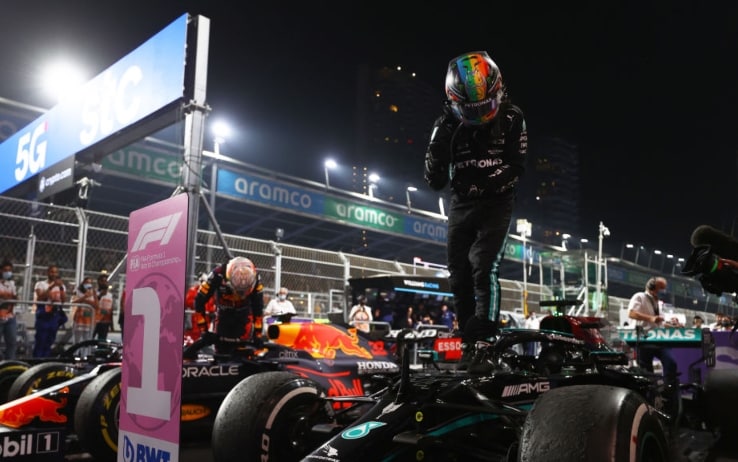 With a bonus point for fastest lap, Hamilton moved alongside Verstappen at the top of the standings with 369.5 points after 21 races.

Lewis Hamilton has escaped a penalty at the Saudi Arabian Grand Prix after the race stewards investigated two separate final practice incidents involving the Mercedes driver and decided neither warranted a drop of positions on the grid.

Hamilton was summoned to the stewards for ignoring double-waved yellow flags in the first half of the session and then for impeding Nikita Mazepin towards the end of the practice hour.

The stewards decided no further action was needed for the yellow flag incident and that only a reprimand (Hamilton’s second of the year) was sufficient for impeding the Haas driver.

Ignoring double-waved yellow flags usually carries a five-place grid penalty, but it turned out the signal was accidentally activated on the central marshalling system and there were no yellow flags or yellow light panels displayed on track.

Other teams had the right to appeal the decision. There was speculation Mercedes’ title rivals Red Bull would do so, but they opted against protesting.

“It feels a little inconsistent with what we’ve seen two weeks ago. We have the right to an appeal. We’ll have a look at the information we have, we haven’t looked at it that closely. These decisions are so late, the team management have to focus on the qualifying. So we’ll have a look and see. One thing that we desperately want is just consistency. The problem is, if there is an appeal, it’ll be heard here, it will be the same stewards, I’m sure it will be the same decision.”

The statement on the yellow flag incident read as follows:

“The Race Director reported to the Stewards that the double yellow flag warning on the FIA Marshalling System was activated at Light Panel Number 6 accidentally, for less than one second.

“As the on-board video of Car 44 (to be released by the Commercial Rights Holder following this Decision) clearly shows, there was no yellow flag displayed, no yellow lights were displayed to that driver and the yellow warning light was not visible on the driver’s steering wheel.

Why was Verstappen given a time penalty for Hamilton clash?

Following deliberations at the Jeddah Corniche Circuit, Max Verstappen was given a 10-second time penalty for being predominantly to blame for the incident that saw Lewis Hamilton run into the back of the Red Bull driver.

Verstappen had held onto the lead of the race by running over the escape area at Turn 1 after an attack from Hamilton on Lap 36/50, but was told to cede position to his rival as a result.

Verstappen appeared to attempt to do this down the back straight on the approach to Turn 27, but Hamilton was seemingly confused by the situation and ended up tagging the back of the Red Bull as Verstappen slowed further.

The clash resulted in front wing damage to Hamilton’s car, as well as rear and tyre damage to Verstappen’s car, and both were summoned to see the stewards after the race to examine the contentious incident.

Verstappen was hit with a time penalty, which doesn’t alter his finishing position of second place, as well as being given two penalty points, which takes him to seven for the current 12-month period. 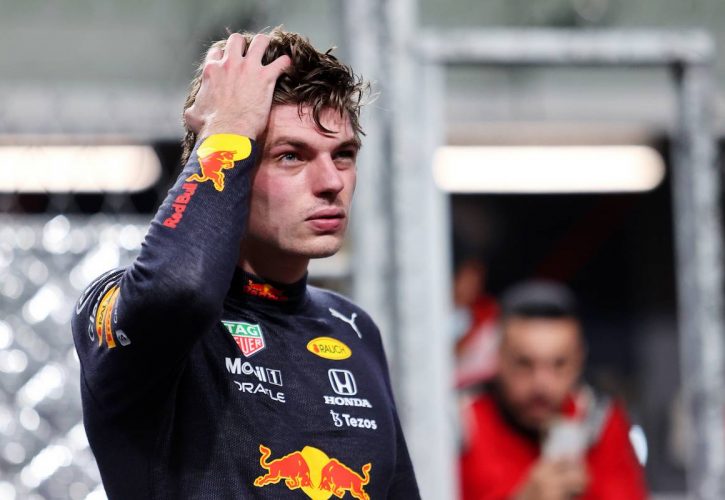 Why not entirely to blame?

The stewards went on to explain that Hamilton did have the option to overtake Verstappen when the Red Bull initially slowed, but they understood his desire not to do so.

“Whilst accepting that [Hamilton] could have overtaken [Verstappen] when that car first slowed, we understand why he (and [Verstappen]) did not wish to be the first to cross the DRS.

“However, the sudden braking by [Verstappen] was determined by the stewards to be erratic and hence the predominant cause of the collision and hence the standard penalty of 10 seconds for this type of incident, is imposed.”

The key point, emphasised by the stewards, was that Verstappen’s telemetry revealed a point of hard braking, as opposed to linear decleration.

Verstappen gets through and past Ocon, Hamilton drops to third#SaudiArabianGP 🇸🇦 #F1 pic.twitter.com/nEvWarlTno

Marko: Red Bull “not treated the same” as Mercedes by FIA stewards

The most notable incidents came in wheel-to-wheel fights between the two drivers. Verstappen twice ran Hamilton deep at Turn 1, and was asked to give the position back on both occasions. He received one five-second time penalty for gaining an advantage off-track.

READ: TYRES: WHAT IS BLISTERING AND GRAINING

Verstappen slowed to allow Hamilton through at one point, only for the Mercedes to run into the rear of his Red Bull, leaving Hamilton’s front wing with damage. The stewards are set to investigate the incident post-race. 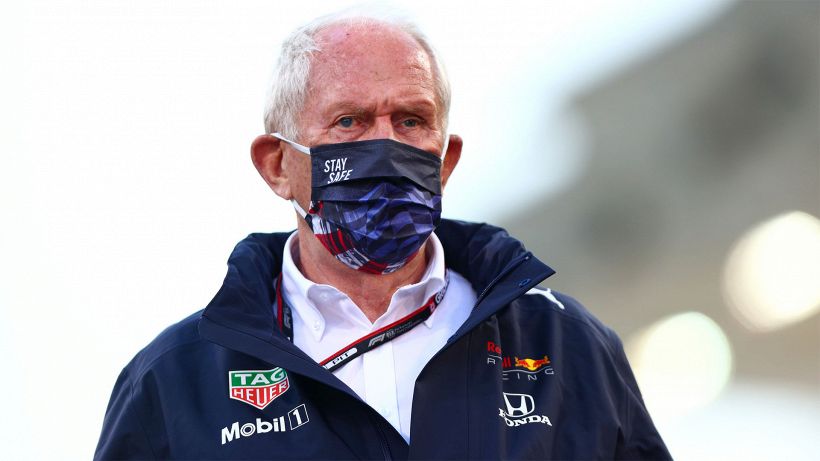 Red Bull was also left unhappy that Hamilton was more than 10 car lengths behind Verstappen en route to the grid at the first red flag restart, as well as believing Verstappen was forced wide at the final corner having allowed Hamilton back into the lead.

Red Bull advisor Marko called it an “extraordinary race”, but said that Red Bull was “not happy and we don’t accept the decisions”.

“That was the one thing. The next thing was at the second start, Hamilton was more than 10 [car] lengths behind. [Sebastian] Vettel got penalised in Budapest when he did it. But with this manoeuvre he [Hamilton] was preparing his tyre better for the start.

“Then he pushed Max off, no reaction. So we feel we are not treated the same.”

Hamilton was summoned over two incidents in final practice on Saturday, but the stewards did not take any major action, only handing him a reprimand for impeding. “It’s a very one-side tending decision-making here,” Marko said.

Hamilton said that Verstappen was “over the limit” in his driving approach, but Marko saw no need for the Red Bull driver to make any changes heading to Abu Dhabi.

“I don’t think there is any reason why he should cool down,” Marko said.

“And just remember what happened in Silverstone, what’s happened in Budapest. Don’t forget that.”